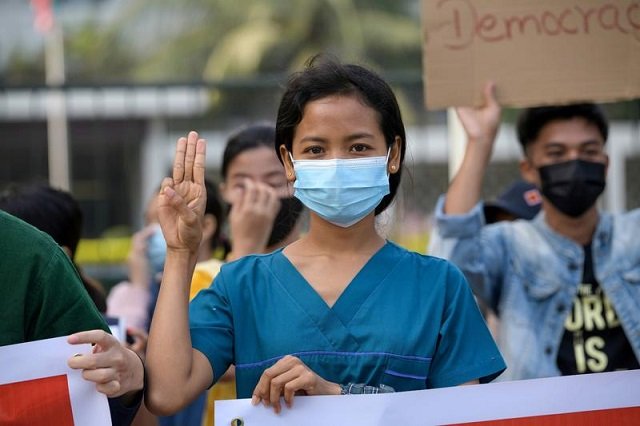 39
SHARES
ShareTweet
Advertisement
Doctors in Myanmar who are participating in the civil disobedience movement (CDM) against the military coup have decided to also carry out their duties to fight against the covid-19 pandemic.
Rector at University of Medicine Dr U Zaw Wai Soe said that plans are in the pipelines to set up COVID-19 treatment centres that will be manned by doctors participating in the movement against the military’s forced transfer of power.
“We will be implementing plans for COVID-19 centres and the doctors participating in the CDM will be taking care of the patients. The COVID-19 centres will be established with volunteer medical workers and they will treat patients who tested positive for the virus at private hospitals. Plans are already underway,” he said.
Currently, government hospitals are only accepting emergency cases and some hospitals are refusing new patients as a majority of their staff are currently participating in the CDM.
“The setting up of the treatment centres was necessary for Yangon to continue its fight against the virus,” said Dr U Zaw Wai Soe.
On February 8, Myanmar had a total of 141,427 COVID-19 cases, 3177 deaths and 127,975 people had been discharged from hospitals. New cases have been dwindling in the past several days with new cases hovering below 10.
Myanmar’s military launched a coup last week on Monday and detained State Counsellor Aung San Suu Kyi, Win Myint and other National League for Democracy (NLD) members.
Earlier, medical workers from Mandalay participated in the CDM on February 3. From then on, many government staff also joined the movement to support the NLD government and fight against the military takeover. Many hospitals including those in Yangon, Mandalay, Pathein, Muse, Sagaing are not receiving new patients anymore.
On February 9 the state media printed a request letter to health workers. As per the letter issued by the health and sports ministry, which is currently under the military government, said they appreciate the strenuous efforts of the medical workers.
Related tags : civil disobedience movement covid-19 Health health workers Myanmar Protest China is collecting DNA from millions of men and boys, using US equipment

A recent research has revealed that the police in China are collecting blood samples from men and boys from across the country to build a genetic map of its roughly 700 million males, giving the autho
Read More