When a legion of Texans descended on their state capitol on Saturday morning, the signs they carried conveyed raw terror about the erosion of their democracy.

Some had just concluded a days-long, 27-mile march from Georgetown to Austin, praying with their feet in a desperate attempt to safeguard access to the vote. For hours, they withstood blistering heat to rally round a casket – a poetic nod to lawmakers in states across the country they say are trying to bury voting rights.

“When you look out here today and see the thousands, and you look at the diversity in this crowd, this is the America they are afraid of,” cried the Rev Dr William J Barber II, co-chair of the Poor People’s Campaign.

The high-stakes protest mirrored a historic march in 1965, when voting rights advocates risked their lives in Selma, Alabama, before the Voting Rights Act was secured. More than half a century later, a new generation of activists hope to protect and expand on those victories.

“When you get out there and you leave the comfort of your home, and in this case you put on your walking shoes and you cover 30 miles in the middle of the Texas summer in central Texas – you’re saying something through that sacrifice and through that struggle,” former US representative and presidential hopeful Beto O’Rourke told the Guardian before participating in the march.

Lawmakers introduced more than 400 restrictive voting bills in 49 states during the 2021 legislative cycle but Texas has emerged as a key battleground in a voting rights war that will ultimately shape the American electorate.

Its Republican leaders remain hell bent on passing laws that advocates warn will make it even harder to vote. So far, such efforts have been thwarted by a tidal wave of opposition.

Earlier this year, the Republican-controlled Texas legislature led the US in new proposals that would restrict voter access, advancing provisions to ban 24-hour and drive-thru voting, empower partisan poll watchers and target vote by mail.

At Saturday’s rally, Marilyn White said she was starting to panic.

“Texas is such a large state and there’s so many electoral votes and so many congressional seats,” she said. “So many votes that are at risk of being messed with or distorted.”

While Texans, faith leaders and politicians gave impassioned speeches, volunteers offered to register eligible voters on the crowded capitol lawn. Yet even they couldn’t ignore the culture of doubt and fear that permeates Texas elections.

“A lot of people, when they come up, they’re worried about registration because they’re worried that they’re gonna make a mistake and they might do something that would cause them to get a ticket or go to jail,” said Julie Gilberg, a captain with Powered by People, an advocacy group.

“They’re not really sure if their vote will count.”

Texas has the most restrictive voting processes in the US. Critics fear further obstacles will disproportionately affect voters with disabilities and people of color. Many believe Republicans touting “election integrity” to justify policies are politically motivated, inspired by rapid demographic change that threatens them at the polls.

“You have a lot of people here whose grandparents were effectively kept from the ballot box, who themselves have had issues trying to vote conveniently,” former US h secretary Julián Castro said.

Texas Democrats have twice outmanoeuvred attempts to pass sweeping voting bills – first by walking off the state House floor in May, then by fleeing to Washington last month. They have been pushed and bolstered by activists, businesses and regular citizens, who have raised funds, written letters and testified into the night.

Yet voting rights champions can only waylay legislation for so long. And although they gathered at the Texas capitol on Saturday, they were effectively appealing to Washington, where federal voting protections have stalled in the US Senate.

“Mr President, the time to act is now,” Barber said. “Let me tell you something you might not be used to hearing from a preacher, but ain’t no need to have power if you’re not gonna use it for good.”

Frustration rippled through the crowd, where Texans fed up with their state officials demanded a response from the White House.

“President Biden I think can do a lot more,” said Tiffany Williams, an air force veteran who joined the march. “If you’re trying to be for the people, actually come down here and listen to us.”

• This article was amended on 2 August 2021 to add further identifying information to the caption of an embedded image. 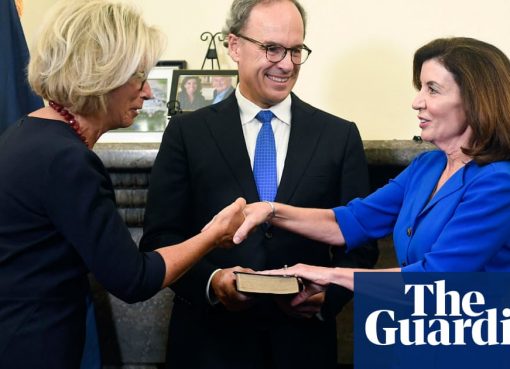 Kathy Hochul, the first woman to become governor of New York state, will make her debut speech from the executive mansion in Albany on Tuesday, after she was sworn into the post in a private ceremony
Read More 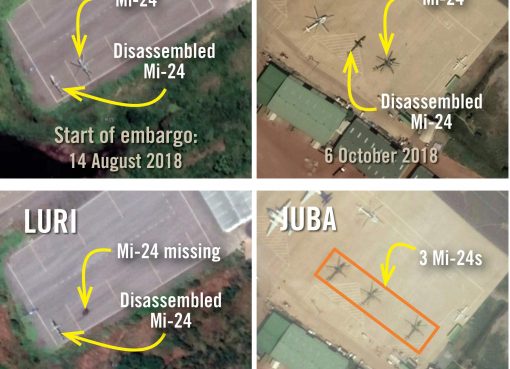 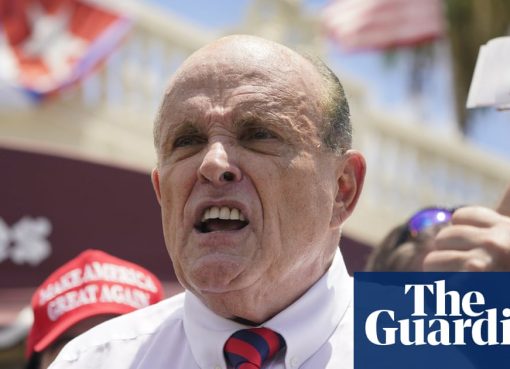 Rudy Giuliani says ‘I committed no crime’ while working for Trump