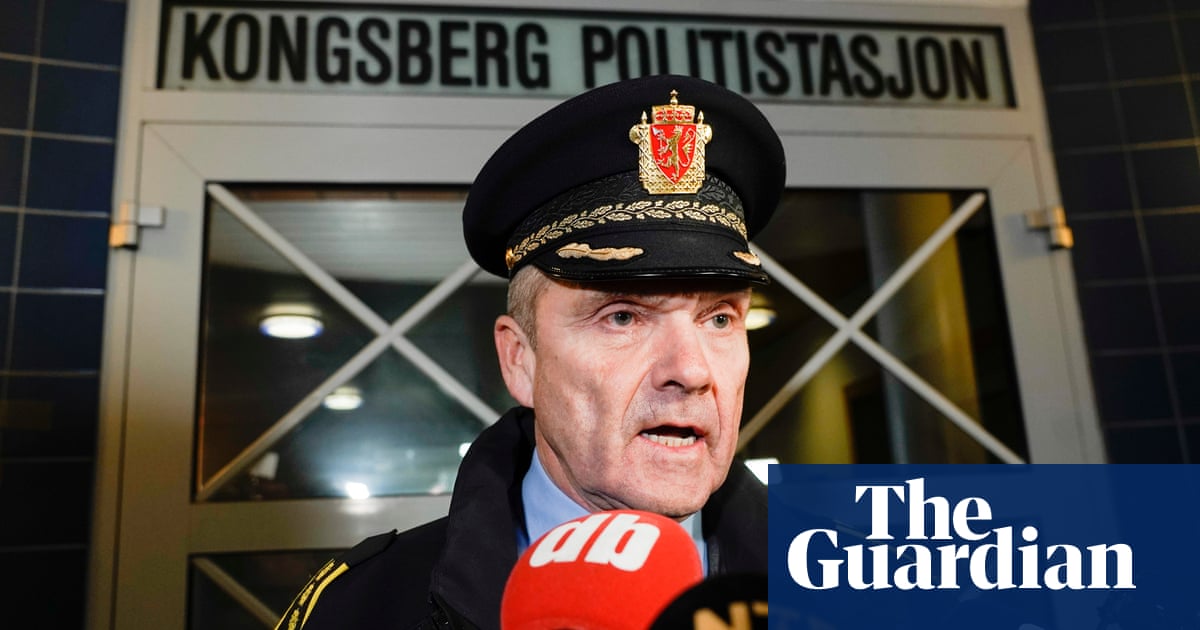 Top story: ‘I saw people running for their lives’

Hello, Warren Murray with the main stories of this morning.

A Danish citizen in his 30s has been arrested and charged after five people were killed and two others injured in attacks using a bow and arrows in the Norwegian town of Kongsberg, police said. The shooting appears to have started in or near a Coop store in the city centre where there were reportedly several casualties.

The Norwegian public broadcaster, NRK, said police in the municipality of about 28,000 people received reports about 6.15pm local time of a man in the town centre firing a bow and arrow. A “large number” of police, helicopters, dogs and armed response teams went in.

The suspect was arrested about 20 minutes later after a brief confrontation with officers, Øyvind Aas, the town police chief, said. “It is natural to consider whether it is an act of terrorism. But the man has not been questioned and it is too early to come to any conclusion,” Aas said. The suspect lived in the town and was transported to the nearby town of Drammen on Wednesday night, police said.

The acting prime minister, Erna Solberg, described reports of the attack as “horrifying” and said it was too early to speculate on the man’s motive. The prime minister-designate, Jonas Gahr Støre, who is expected to take office today, called the assault “a cruel and brutal act”.

‘Breakthrough’ Covid infections – Scientists have urged eligible people to have Covid booster shots after a major survey in England found evidence of “breakthrough infections” more than three months after full vaccination. Infection rates were still three to four times higher among the unvaccinated than those who had completed their initial two shots. But the protection may start to wane between three and six months afterwards, researchers from University College London say. The findings are not yet peer-reviewed, and other studies have suggested that the protection given against hospitalisation and death by initial vaccination is far more robust.

Regeni trial begins – A court in Rome is due to commence the trial in absentia of four Egyptian security service officers accused of killing the Cambridge student Giulio Regeni, five and a half years after the Italian’s mutilated body was found in a ditch by a road in Cairo. Egypt has reportedly stonewalled efforts to investigate the incident. The accused are agents of Egypt’s powerful National Security Agency, which prosecutors said trapped Regeni “in a spider’s web” of surveillance in the months before his death while he researched trade unions in Cairo, a topic the Egyptian government views as politically sensitive.

MP guilty of harassment – Claudia Webbe, the independent former Labour MP for Leicester East, is facing a potential jail sentence and demands to stand down from her seat after being found guilty of a campaign of harassment including threatening an acid attack.

Webbe was accused of harassing Michelle Merritt, a friend of her partner, with threatening phone calls. The trial was told she had called Merritt a slag, threatened to “use acid” and said she would distribute naked pictures of Merritt to her family. Webbe has protested her innocence, said she would appeal, and made clear that she planned to continue as an MP.

Ply-rise development – The eco-town of Skellefteå has wooden schools, bridges, even car parks. And now it has one of the world’s tallest wooden buildings. Nosing 20 storeys above the low-rise skyline, the Sara Cultural Centre and its towering Wood Hotel stand as beacons of what it is possible to do with timber – and store about 9,000 tonnes of carbon from the atmosphere in the process. The building’s two main materials are glued laminated timber (glulam) and cross-laminated timber (CLT).

The former uses layers of wood bonded together with the grain running in the same direction, giving it a higher load-bearing capacity than both steel and concrete, relative to its weight. CLT has each layer stuck at right-angles to the next, making it strong in all directions, perfect for walls and floor slabs. Oliver Wainwright, the Guardian’s architecture and design critic, visits Sweden to see how a climate-conscious future is built.

Today in Focus podcast: In and out of the office all week

Ever since the order to work from home was lifted, workers in England have been heading back to the office – but mostly only a few days a week. Joanna Partridge looks at whether work will ever be the same again.

Edwin Robbe had a troubled life, but found excitement and purpose by joining an audacious community of hackers – culminating in his pervasive, comprehensive hack of the big Dutch internet provider KPN. Then the real world caught up with his online activities, and tragedy followed.

The former Olympic sprint champion and broadcaster Michael Johnson is launching Defiance, a documentary-style podcast series that focuses on athletes who have made a stand against social injustice. Glenn Hoddle, the former Tottenham and England playmaker, has come through his 2018 cardiac arrest and still loves the ‘beautiful game’. Emma Hayes said Pernille Harder had taken Chelsea to “an even higher level” after the Danish forward earned the Blues all three points in a narrow victory over Juventus in Turin.

Even as the tour winds down after a long, gruelling year, Cameron Norrie continues to add to his achievements in the best season of his life. At the BNP Paribas Open in Indian Wells, Norrie moved into his first career ATP Masters 1000 quarter-final by defeating the American Tommy Paul 6-4, 4-6, 6-2. The Metropolitan police have defended their tactics in a violent confrontation with Hungary fans at Wembley on Tuesday night. Owen Farrell is only getting better as he enters his 30s and deserves to lead the England team into the 2023 Rugby World Cup, according to his predecessor, Dylan Hartley.

The US has overtaken China as the world’s largest bitcoin miner, according to new data that highlights the impact of a crackdown on bitcoin trading and mining launched by Beijing in late May. More than 35% of the cryptocurrency is now mined in the US with China’s share falling from 44% to zero in five months. The FTSE100 is due to lift 0.4% this morning while the pound is on $1.366 and €1.178.

“EU braces for PM’s response after offering deal on Northern Ireland”. Our Guardian print edition says there are signs Boris Johnson might reject a deal whereby the EU would scrap 80% of checks on foods entering Northern Ireland from Great Britain. Maroš Šefčovič, the EU’s Brexit commissioner, also announced that customs checks on manufactured goods would be halved, and said he would meet David Frost, his UK counterpart, on Friday.

Also on our front: “To oldly go …” after William Shatner returned tearful and effusive from touching space in a Blue Origin capsule. Others have that too, though the Metro’s coverage runs contrary: “[Prince] William in blast at space tourism”. The Mirror has “Rush to save Xmas” as “lack of HGV drivers creates chaos at ports”. The Express offers advice to shop early: “Get your skates on for a happy Christmas”.

The Mail continues to hail itself with “GPs: the new face-to-face revolution”, taking credit for incentives for in-person appointments. On the front of the Times we have stick rather than carrot: “Doctors face penalties for seeing too few patients”. The Financial Times leads with “EU offers to scrap most N Ireland checks to resolve Brexit standoff”. 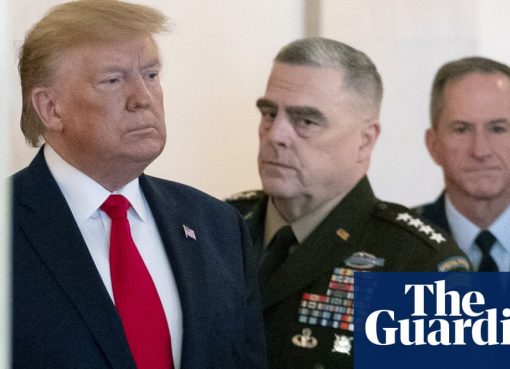 Shortly before the deadly attack on the US Capitol on 6 January, the chairman of the joint chiefs of staff, Gen Mark Milley, told aides the US was facing a “Reichstag moment” because Donald Trump was
Read More 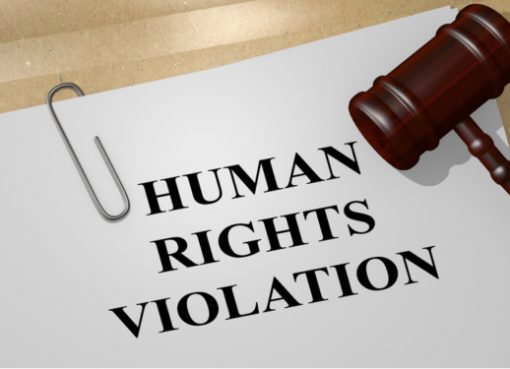 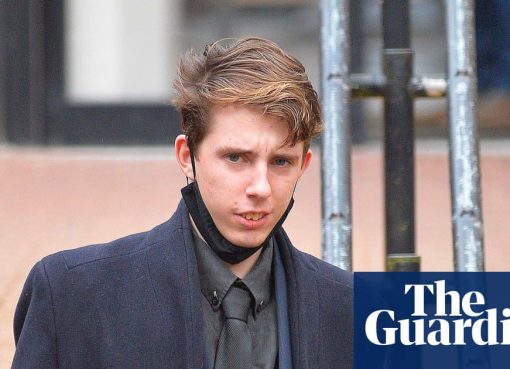 Show caption Ben John will have to return to court every four months to be tested on his reading of Dickens, Austen, Shakespeare and Hardy. Photograph: Leicester Mercury/BPM MEDIA Far right UK judge o
Read More

On the occasion of tomorrow's #HumanRightsDay (s. ), one of the things #MarijaPBuric emphasizes esp. is that "'the #EuropeanConventiononHumanRights was designed to help national authorities ensure respect for the basic #humanrights of ordinary people...
4a/

Human rights are the foundation of German foreign policy. And they include access to clean drinking water. Together with its partners, Germany invests in projects with that goal, for example, in South Sudan. #humanrights

The SLF Pride Talks: Safety at Home for LGBTIQ Communities in sub-Saharan Africa is happening TODAY at 11 a.m. EST!

Hear from leaders of two vital community-based orgs in DRC and Kenya about how they are creating safety at home for #LGBTIQ communities in the face of violence and discrimination.🏳️‍🌈