Authorities in Mariupol have said as many as 300 people were killed in a Russian bombing of a theatre last week, putting a death toll for the first time on the deadliest single attack since Moscow launched its invasion of Ukraine more than a month ago.

The figure, based on the accounts of witnesses, came as the United Nations human rights team in Ukraine said it had reports of mass graves in the southern port city, including one that appeared to hold 200 people.

The death toll in Mariupol was revealed as the Kremlin hinted on Friday that it may be scaling back its war ambitions, saying it was close to completing the “first phase” of its military campaign and would now focus on the complete “liberation” of Donbas in eastern Ukraine.

“The combat potential of the armed forces of Ukraine has been considerably reduced, which … makes it possible to focus our core efforts on achieving the main goal, the liberation of Donbas,” said Sergei Rudskoi, the head of the Russian general staff’s main operational directorate.

He said that while Russia did not rule out that its forces would storm cities such as Kyiv, taking them over was not a primary objective.

The comments correspond with Ukrainian and western analysis that Russian forces have put their efforts around Kyiv on hold as they are unable to fight both there and in Mariupol, a key port in Putin’s war plan.

The Pentagon said that Russian forces had halted their ground offensive on Kyiv, while continuing to bomb it from the air.

“It appears that the Russians are, at least at the moment, not pursuing a ground offense towards Kyiv,” a senior US defence official said. “They are digging in, they are establishing defensive positions…We’re still seeing airstrikes but nothing from the ground.”

The official added: “That is in keeping with our assessment of a couple of days ago that they are going to prioritise the eastern part of the country, in terms of ground offense, and that is exactly what we’re seeing.”

But western officials cautioned that rather that pulling back, Russia was sending extra forces into Ukraine and preparing to deploy another 10 battalion tactical groups – a fighting unit of about 1,000 troops, plus tanks and heavy artillery – from Siberia in the east and Kaliningrad in the west to add to the original invasion force of 115,000 to 120,000. Committing the extra forces was a sign “how far Putin has gone all in”, one official said.

In other developments on Friday:

Ukraine’s president, Volodymyr Zelenskiy, implored Viktor Orbán, the Hungarian prime minister, to cut trade ties with Russia and join other EU countries in supplying arms to Ukraine. “Listen, Viktor, do you know what’s going on in Mariupol?” Zelenskiy said, adding that Hungary needed “to decide who you are with”.

Joe Biden visited the Polish town of Rzeszów, near the Ukrainian border, in a symbolic show of support for Nato’s eastern European members and for a first-hand look at international efforts to help more than 2 million Ukrainian refugees who have fled the country.

Vladimir Putin compared the cancellation of events involving Russian artists in protest over the invasion to the burning of books in Nazi Germany. “Today they are trying to cancel a 1,000-year-old country,” Putin said.

Britain believes about a sixth or maybe a fifth of Russia’s invasion force – an estimated 20 battalion tactical groups – is no longer “combat effective” – a high degree of losses reflecting the botched invasion and fierce Ukrainian fightback. Putin’s goal was understood by western officials to have been to secure Kyiv within days of the invasion being launched on 24 February.

In a sign of diminishing troop morale, western officials claimed that a Russian commander of the 37th motor rifle brigade was deliberately run over by his own troops in response to the massive military losses being endured.

Late on Friday, Emmanuel Macron said he would speak with Vladimir Putin in the coming days in the hope of negotiating the evacuation of Mariupol’s 150,000 remaining residents.

The city, which has seen some of the most horrific fighting and bombardment of civilian targets such as hospitals and apartment blocks, stands in the way of Russia securing a land corridor between Crimea and the eastern Donbas region that include the parts of Luhansk and Donetsk held by pro-Russian forces with Moscow’s backing since 2014.

Putin’s forces are now pushing deep into the administrative part of the city. Ukrainian sources told the Guardian that they were now clearing multi-storey buildings “one by one and methodically checking every square inch”.

The source said: “If nobody opens the door or the apartment is empty, they break down the door. They are looking for the military and potential saboteurs. They use a scorched-earth policy, to make sure there’s no one to shoot at them or to throw Mmolotov cocktails. I can tell they rely on their previous experience of urban warfare.”

The Ukraine government believes the Azov battalion in the city will continue to fight on, holding up Putin’s plans to create a land corridor enabling his forces to resupply through Mariupol’s port.

Officials in the besieged city said on Friday that at least 300 people were now known to have been killed in the bombing on 16 March of Mariupol’s Drama Theatre, which had been marked with white paint as containing sheltering children.

Civilians trapped in Mariupol, normally home to 400,000 people, have been sheltering in basements with little food, power or running water. About 1,300 people were believed to have been in the building when it was struck, and 150 survivors staggered out of the rubble after the attack.

Sources said the bulk of those in the theatre had been hiding from the shelling under the stage and that rubble was blocking their exit. There are no emergency services operating in Mariupol and the intense fighting and shelling near the theatre has prevented rescue attempts.

The Ukrainian government previously said it was impossible to tell how many were killed because Mariupol was in chaos and under almost constant bombardment from Russian forces.

In a statement on Friday morning, a spokesperson for the city council said they were able to share a death toll. The statement said: “From eyewitnesses, information appears that about 300 people died in the Drama Theatre of Mariupol as a result of a bombardment by a Russian aircraft.”

The Ukrainian defence was boosted on Thursday by the destruction of the Orsk landing ship docked in Berdyansk on the Azov Sea using Ukrainian ballistic missiles. Two other vessels were made inoperable.

The Orsk, which contained weapons and supplies for forces fighting in Mariupol, was capable of carrying 20 tanks, 45 armoured vehicles and 400 troops. 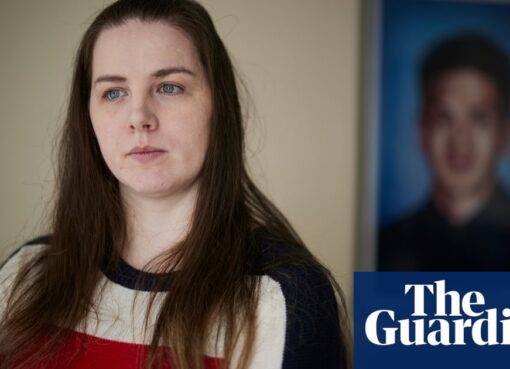 ‘Some days I really struggle’: Jade Akoum on the killing of her schoolboy brother

Show caption Jade Akoum at home, a picture of her brother Yousef behind her. Photograph: Christopher Thomond/The Guardian Crime ‘Some days I really struggle’: Jade Akoum on the killing of her schoolbo
Read More 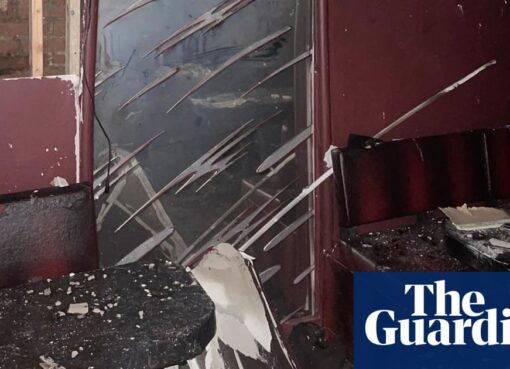